Heterotopic pregnancy (HP) is a clinical situation in which an intrauterine pregnancy and an ectopic pregnancy coexist. It is a rare condition with an incidence of 1/30000, but after the generalization of assisted reproductive techniques (ART), it amounts to 0.15–1% [1,2].

The actual aetiology of HP is uncertain, but the use of ART, pelvic inflammatory disease, previous tubal or uterine surgery, a previous ectopic pregnancy, a history of recurrent abortions, or a syndrome of ovarian hyperstimulation, are known as risk factors [2-4]. Based on these, the ectopic gestational sac can be located in the fallopian tube (the most frequent location), in the uterine horn, cervix, previous caesarean section scar or abdominal cavity [4].

The cervical location of HP is very unusual and is related to a higher incidence of maternal-fetal complications, such as prematurity, abundant vaginal bleeding and the performance of an emergency hysterectomy [5,6].

Nowadays, there are several therapeutic options to consider when managing an ectopic cervical pregnancy. A recent review of the main guidelines on the management of ectopic pregnancies suggests that cervical ectopic pregnancies with viable embryo exceeding 9 weeks with serum -human chorionic gonadotrophin (-hCG) levels greater than 10.000 IU/L or a crown-rump length greater than 10 mm, should be treated with a combination of intramuscular methotrexate (MTX) with other procedures (such as curettage or cervical blocking or uterine artery embolization (UAE) or local injection of MTX or potassium chloride). Besides, surgical methods should be restricted to women with life-threatening bleeding [7]. However, this management could be different in cases of cervical heterotopic pregnancies in order to preserve the intrauterine gestation.

A case of cervical heterotopic pregnancy with live embryo treated conservatively with sacular aspiration and puncture with KCl guided by ultrasound, achieving the preservation of intrauterine pregnancy, is presented. Moreover, conservative management of severe vaginal bleeding occurring in third trimester as a secondary complication to cervical pregnancy using a double balloon catheter is described.

A 39-year-old woman was admitted to our emergency department at 7 weeks of gestation with vaginal bleeding and abdominal pain. The reproductive history included a eutocic delivery and a surgical history of right salpingectomy due to ectopic pregnancy. The current pregnancy was achieved after in vitro fertilization.

On examination, the abdomen was soft and depressible. Gynaecological examination revealed moderate active bleeding and a permeable external cervical os. In the ultrasound, two gestational sacs were observed, one of them in the uterine fundus with a live embryo of 11 mm according to 7 weeks of gestational age and a second sac of 36 50 21 mm with a live embryo of 11 mm in the anterior cervical wall (Fig. 1). A complete analysis was requested, which showed mild anemia (Haemoglobin (Hb) 10.5 g/dL, Haematocrit (Hct) 33.2%, leukocytes 12,500/mm, neutrophils 82.3%, C-reactive protein (CRP) 1.32 mg/L). It was decided not to monitor serum -hCG levels due to the coexistence of intrauterine pregnancy. 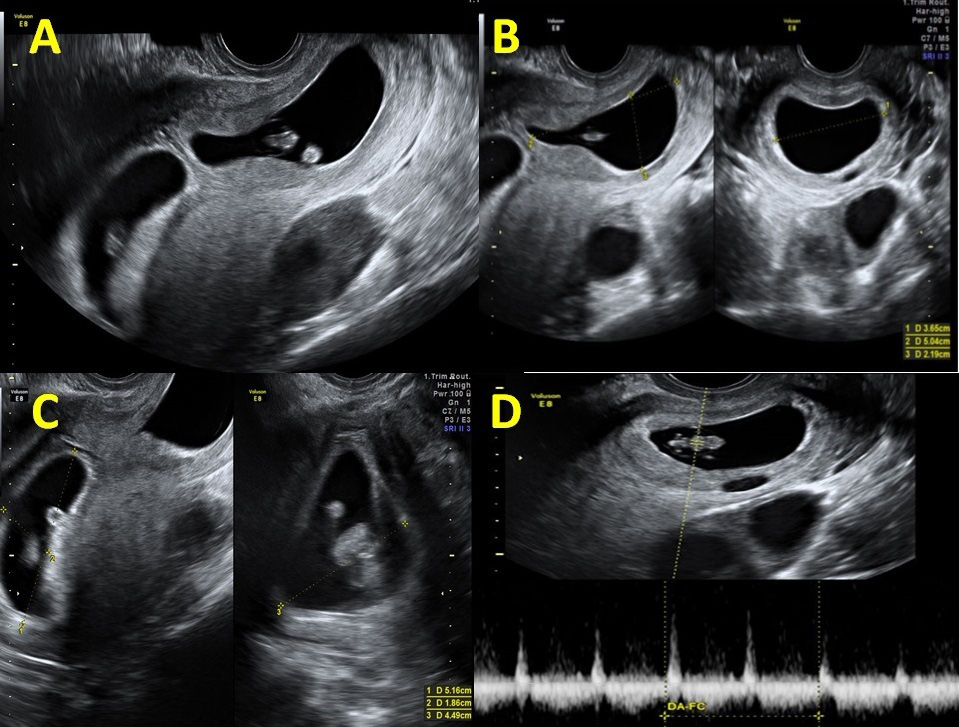 Due to the hemodynamic and analytical stability of the patient and once the informed consent was signed, an ultrasound-guided intrasacular injection of the cervical gestation with 2 mEq of KCl in 2 mL of physiological saline solution (PSS) was carried out at 8 weeks of gestation, using Ovum Aspiration Needle Cook Medical® (Cook Medical, Brisbane, Australia) and subsequently aspirating the ectopic sac until its collapse. Cessation of heartbeat in ectopic embryo and vitality of the intrauterine embryo was verified by Doppler using Thosiba Xario (Thosiba Medical Systems, Tochigi, Japan) 100 ultrasound.

During admission, the stability of the residual cervical mass was sonographically verified, without the patient presenting haemorrhagic complications or severe pain. Thus, she was discharged seven days after surgery, on 200 mg vaginal progesterone (Laboratorios EFFIK, Madrid, Spain) every 24 hour, a treatment she maintained until week 28 of gestation. The pregnancy was uneventful except for a diagnosis of gestational diabetes treated with insulin, observing persistence of a 38 27 mm cervical image in the second trimester ultrasound without Doppler uptake inside (Fig. 2).

However, at week 30 of gestation, the patient was admitted due to premature rupture of the membranes, without evident uterine contractions, setting lung maturation with two doses of intramuscular betamethasone 12 mg separated 24 hours and prophylactic intravenous antibiotic therapy. During admission, the patient presented anemia (Hb 9.7 g/dL), leucocytosis up to 16,200 and elevated CRP to 5.05 mg/dL, although she was apyretic.

At week 32 of gestation, the patient started with irregular uterine contractions associated with maternal and fetal tachycardia, so it was decided to induce labour with vaginal misoprostol (Laboratorios BIAL, Madrid, Spain) due to suspected chorioamnionitis (T 37.9 C, 16,200 leukocytes, 81% neutrophils and CRP 3.87 mg/dL). During the induction process, a cervical exploration was performed, observing profuse bleeding from a cervical arteriole. The patient presented hypotension (80/45 mmHg) and tachycardia (160 bpm) and a decelerative pattern was observed in the cardiotocographic fetal monitoring, for which an urgent caesarean section was carried out, obtaining a live fetus in cephalic, 1800 g, Apgar 3/7, pH 6.91 (arterial), 6.94 (venous).

At the end of the caesarean section, the patient had an Hb of 6.3 g/dL and Hct of 18.9%, requiring treatment with 1 g of tranexamic (Medochemie Ltd, Limassol, Cyprus) acid, 1 g of fibrinogen (CSL Behring Gmbh, Marburg, Germany) and one pack of red blood cells in the operating room. Besides, persistence of cervical bleeding was observed, so it was decided to place a Cook Medical® double balloon catheter filled with 80 cc of physiological saline solution (PSS) in the intrauterine balloon and 100 cc in the vaginal balloon (Cook Medical, Bloomington, Indiana, USA) (Fig. 3), achieving the cessation of bleeding. 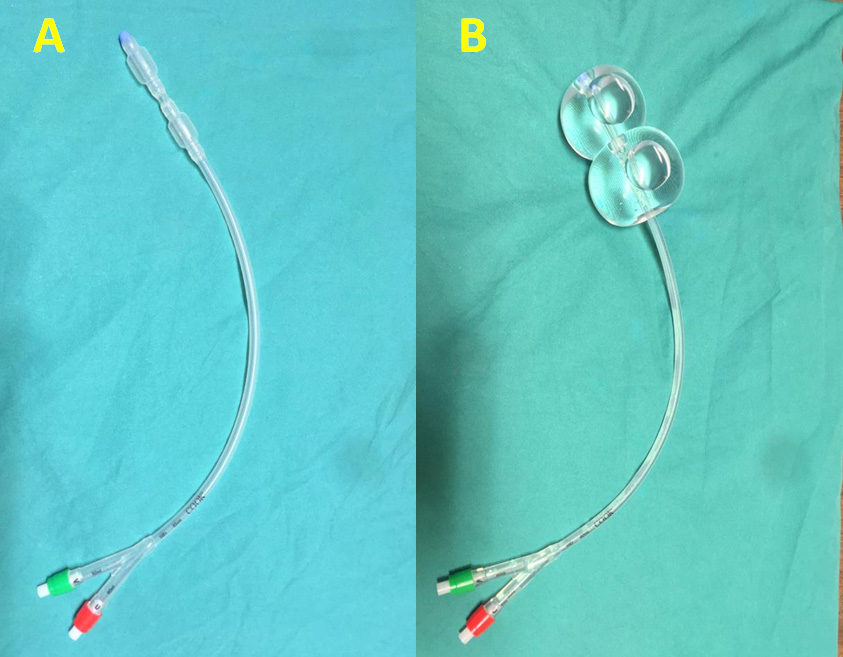 The double balloon catheter was withdrawn 24 hours after its insertion without observing a new bleeding episode. The patient required the transfusion of a total of five packs of red blood cells during the admission and was discharged on the eighth day asymptomatic with haemoglobin of 10.4 g/dL. Moreover, the newborn was admitted to neonatology presenting a favourable evolution and being discharged at 35 days of life.

HP is an unusual entity that rarely appears in spontaneous pregnancies; however, its incidence has increased in recent years due to the use of Assisted Reproductive Techniques (ART), especially in those techniques that involve embryo transfer [1,2].

Currently, the reason why ART predisposes to abnormal implantation of the embryo at the cervical level is unknown, although it could be related to risk factors common to this type of patient (cervical abnormalities, history of previous curettage) as well as factors associated with the technique used in embryo transfer such as cervical lesion during the procedure, volume and viscosity of the transfer medium or reflux of the transferred embryo from the cavity to the cervix [5,8].

The cervical location of HP is very infrequent, and furthermore, it presents some specific characteristics. For example, patients usually begin with vaginal bleeding, present in up to 80% of the cases recently reviewed by Terra et al. [5].

In fact, when a cervical HP is diagnosed, the possible complications that may appear during the rest of the pregnancy must be taken into account. Terra et al. [5] describe in their series that 20% of cases are associated with prematurity (this being the most frequent complication), followed by heavy bleeding that requires transfusion and emergency hysterectomy. In this sense, the complete evacuation of the cervical pregnancy seems to be essential to avoid complications; Kim JW et al. [6] published that 91.7% of the cases in which complete evacuation was achieved did not present complications, while 58.3% of the cases in which trophoblastic tissue persisted suffered from problems, mainly bleeding or infection.

Possibly, the episode of preterm birth secondary to chorioamnionitis, as well as the complication of severe vaginal bleeding described in this case, were due to incomplete evacuation of the cervical sac with persistence of trophoblastic tissue at this level even though the cervical image did not have a Doppler signal inside.

Nowadays, the management of HP is a challenge for obstetricians since there is no clear consensus on which is the most appropriate therapeutic option and we must take into account that a large percentage of patients with HP derive from ART and have a strong desire to preserve the viability of intrauterine gestation. Therefore, it seems reasonable to carry out a conservative management of these patients when it is possible and we should avoid the use of MTX due to its teratogenic risk [9]. In this sense, sacular aspiration with injection of KCl is an effective option that we should take into account given the cervical location of the sac and the easy access by ultrasound-guided puncture [5].

Kwon et al. [10] have recently argued that in those hemodynamically stable women who present a heterotopic interstitial pregnancy with cardiac activity in the extrauterine embryo, the best therapeutic option is sacular aspiration with KCl injection since it is a less invasive technique, with less blood loss, with less surgical morbidity and that preserves the fertility of the patient. We hypothesize that this technique would also be of choice in cases in which the HP is in locations of difficult surgical access such as the cervix, as in the case presented here, a previous caesarean section scar or at the cornual level [5,11]. Furthermore, in the specific case of cervical ectopic pregnancies, the use of this technique seems logical given the easy access by ultrasound-guided puncture [5].

Heterotopic pregnancy is an increasingly frequent clinical situation due to the greater use of assisted reproductive techniques. Performing a conservative management of the ectopic pregnancy may be possible, achieving the preservation of the intrauterine pregnancy. Besides, the cervical location of the ectopic sac may be associated with an increased risk of severe bleeding, which can be managed conservatively through the use of a double balloon catheter.

The patient gave us her verbal informed consent for the publication of this manuscript. The study was conducted in accordance with the Declaration of Helsinki, and it was approved by the Ethics Committee of our hospital (PI18/142).