Although acute appendicitis in pregnant women is uncommon, it is the primary cause of non-obstetric surgeries with an incidence rate of 1 in 1250–1500 pregnant women [1-4]. Precise diagnosis of appendicitis is challenging as it shares several symptoms which may be considered normal during pregnancy. For example, nausea and vomiting may be recognized as morning sickness, and abdominal pain can be misdiagnosed as ectopic pregnancy. Moreover, the complex physiological processes operating during pregnancy might also make clinical signs of appendicitis obscure. For instance, the increscent uterus may displace appendix superiorly to out of the right lower quadrant in some pregnant women. Furthermore, Lee and his colleagues [5] reported that the rate of negative appendectomy is higher in pregnant women and is associated with increased risk of fetal loss and/or premature birth [6,7]. In addition, negative appendectomy and has no substantial impact on decreasing the rate of perforated appendicitis [8]. Therefore, it is crucial for surgeons to diagnose appendicitis accurately, especially in pregnant women.

We performed a systematic computerized search using The National Library of Medicine (MEDLINE), Excerpta Medica Database (EMBASE) and the Cochrane Controlled Trials Register (CENTRAL) databases. The query terms “acute appendicitis”, “pregnancy”,“diagnosis” and “ultrasound” were used. English articles published up until the end of June 2020 were reviewed. Totally 140 articles were reviewed.

The initial assessment of studies was based on the article title, abstract and availability of full text. Exclusion was applied for studies involving patients who did not match the review question or ultrasound was not used as a diagnosis tool, or if they were reviews, case reports, or if they did not provide the required data.

The quality and applicability of articles were evaluated by the Quality Assessment Tool for Diagnostic Accuracy (QUADAS-2) [15]. Four assessments including index test, flowing, patient selection, reference standard and timing were analysed. 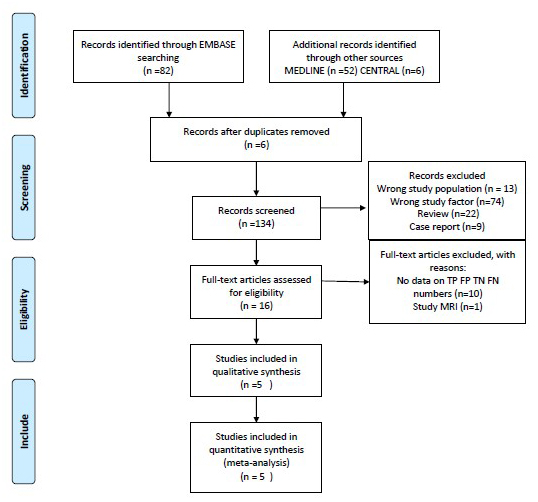 The process of study selection.

The five selected studies were retrospective and involved 521 participants, of which studies involving pregnant women seeking diagnosis of appendicitis were included. All trials were single medical center. Pathological test after appendectomy was used to determine the diagnosis performance of ultrasound and served as the standard reference.

All selected studies were retrospective studies by obtaining the information from hospital digital records. None of the article used consecutive or random sampling method for selection of patients and all included certain patients (the number of patients ranged from 2 [13] to 25 [14]) who meet the included criteria but had no record for ultrasound. The ultrasound was applied before operation; therefore, results of the index test were deciphered without a reference standard. Four out of five studies [12,13,16,17] mentioned that ultrasound results were interpreted by experienced radiologists. Three studies [12,13,17] gave reasons for categorization using pre-specified thresholds. None of the five studies explained whether the pathology results were interpreted independently of the index tests. All the participants who were applied with ultrasound diagnosis receive the same pathology test. 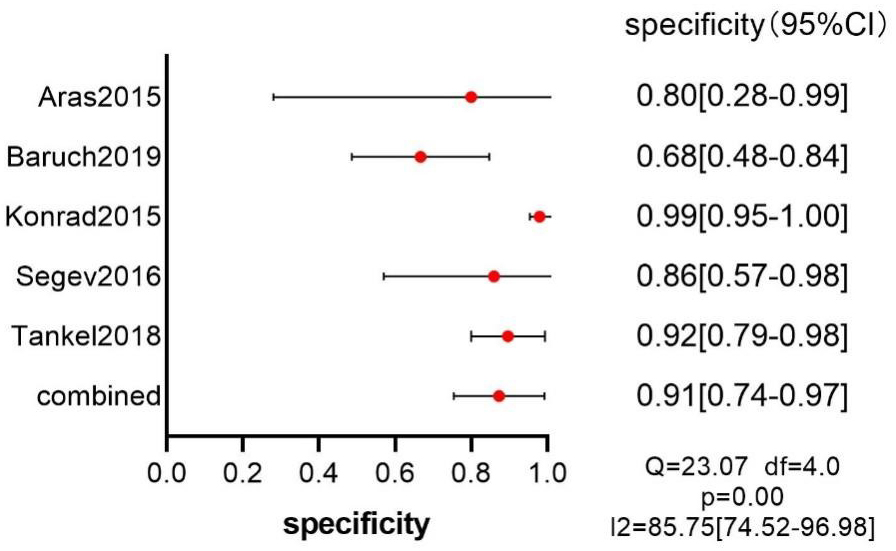 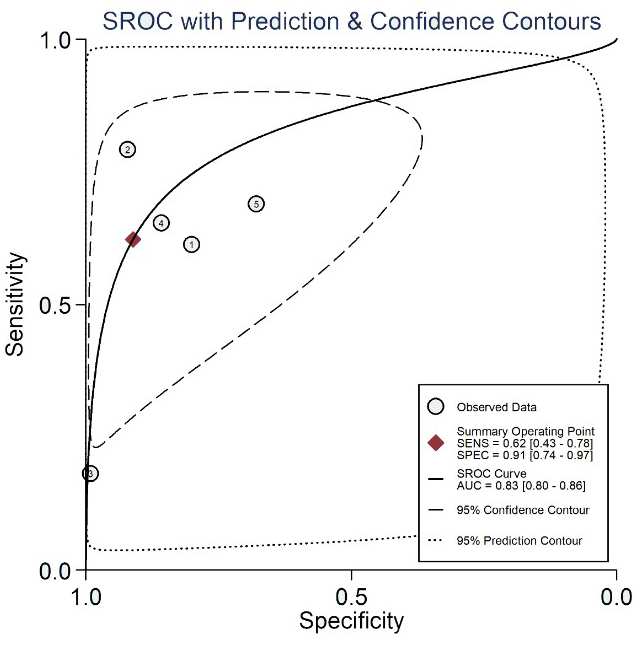 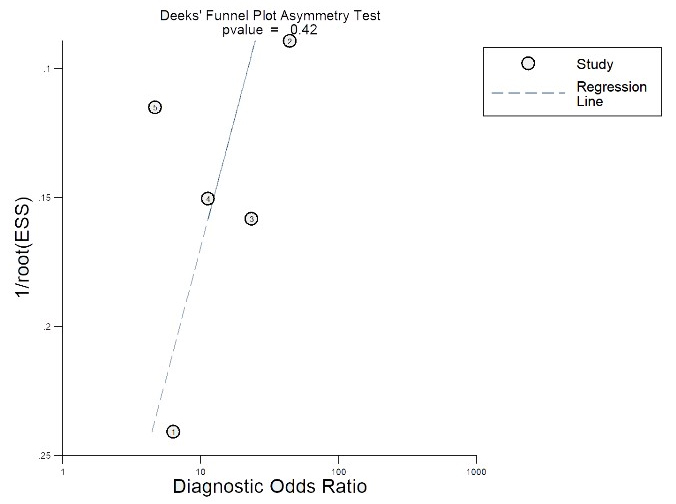 Meta-analysis studies [18-20] showed that the sensitivity as well as specificity of the ultrasound for the diagnosis of acute appendicitis were 69%–83.1% and 81%–93% respectively. Moreover, ultrasound is widely available, economical, and imposes no adverse ionizing radiation [12]. However, Yoav et al. [14] showed that ultrasound examination of pregnant women might provide an inconclusive data (43.3% vs. 11.1%, p 0.001), while Lior and colleagues [17] indicated that the diagnostic performance of ultrasound was similar between the pregnant and non-pregnant patients (AUC 0.76 and 0.73 respectively, p = 0.78).

The sensitivity of CT is 91–98.5% and the specificity is 90–98% [21-23]. The excellent performance on diagnosis makes CT the most widely used examination in general population with suspected appendicitis. However, CT is not recommended for pregnant women due to its radiation. The consequence of radiation exposure in fetuses is mostly based on observations rather than original research which is banned due to ethical issues [24].

Kave and his colleagues [25] reported that MRI had sensitivity of 91.8% whereas the specificity of 97.9% in diagnosing appendicitis in pregnant women. According to Saini et al. [26], the technical cost of MRI was more expensive than that of ultrasound. The use of a class C drug called gadolinium makes the safety of MRI uncertain according to the Food and Drug Administration [27]. Therefore, MRI is only used if the ultrasound results are inconclusive, for suspected appendicitis during pregnancy [27].

In this meta-analysis, the sensitivity and specificity for ultrasound in diagnosing of appendicitis during pregnancy were 62% and 91%, respectively. It was reported that an optimized ultrasound algorithm significantly improved the diagnoses of appendicitis made by ultrasound, and the diagnosis performance might be further improved when operated by experienced radiologists [28,29]. Moreover, Leichtle and his colleagues [30] reported that obesity was associated with increased rate of incorrect results from ultrasound, and Hoffmann et al. [31] found that intra-abdominal air could foil image acquisition.

There are a few limitations in our study. All five articles included were retrospective studies. The five articles only included patients with suspected appendicitis that also underwent appendectomy. The information for pregnant patients who underwent ultrasound test but without the appendectomy was missing and no follow up information was obtained. All those factors might make the TP and FP lower than actual numbers. Moreover, those articles [32-36] provided the sensitivity and specificity values but not TP, FP, TN or FN values from the revision.

In summary, data of this meta-analysis revealed that ultrasound had a medium-level sensitivity and high specificity on the diagnosis of acute appendicitis in pregnant women.

We are very grateful to all people that helped us in the process of writing this manuscript. In addition, we would like to thank the anonymous reviewers who have helped to improve the paper.

The process of study selection.