Endometrial cancer is the most common malignant tumor of the female genital tract [1], affecting over 38,000 patients annually [2].

In 1988, the International Federation of Gynecologists and Obstetricians (FIGO) developed a surgical staging system for endometrial cancer. After that, data from more than 42,000 cases were analyzed, and a new stage classification of surgery was revised in 2008 [3]. One of the major changes was that only positive peritoneal cytology was excluded from stage IIIA, because some reports showed a small impact of peritoneal cytology as a prognostic factor [4,5]. However, since the revision, multiple studies have demonstrated a poor prognosis of positive peritoneal cytology in endometrial cancer patients [6-8]. The significance of ascites cytology in endometrial cancer is still controversial. Furthermore, to the best of our knowledge, there are no reports investigating peritoneal cytology as a prognostic factor in endometrial cancer patients specifically treated with minimally invasive surgery. In 2009, the LAP2 study [9] reported that laparoscopic surgery for early-stage endometrial cancer is not inferior to open surgery in terms of surgical and oncological outcomes. Since then, laparoscopic surgery for endometrial cancer has spread rapidly around the world. In contrast, prognosis was poor after minimally invasive surgery (MIS) in cervical cancer during the LACC trial [10]. Cell scattering during colpotomy and the use of a manipulator and tumor spread via pneumo-peritoneal CO were presumed to be the causes of poor prognosis [11]. Tumor spread via pneumo-peritoneal CO is unique to MIS and may be particularly relevant in patients with positive ascites cytology.

The object of this study was to investigate the clinical significance of peritoneal cytology in laparoscopic surgery for early-stage endometrial cancer.

A single-institute, retrospective observational study was conducted in accordance with the Declaration of Helsinki and was approved by the Ethics Committee of the Yokohama Citizens Municipal Hospital, Kanagawa, Japan.

The subjects were patients who underwent laparoscopic surgery for endometrial cancer stages I–III (FIGO2008) at the Yokohama Municipal Citizen’s Hospital between January 2014 and December 2019. We excluded patients who underwent palliative surgery due to old age, complications, and performance status. We classified patients into three groups (group A: surgical stage I/II and peritoneal cytology negative, group B: surgical stage I/II and peritoneal cytology positive, and group C: surgical stage III) and examined oncological outcomes retrospectively based on the patients’ medical records.

Laparoscopic surgery was first introduced in 2014, and the proportion of this type of surgery has gradually increased. In 2019, 97.6% of patients with endometrial cancer underwent laparoscopic surgery. The surgical procedure selection is shown in Table 1.

Ascites in the abdominal cavity was collected as the first step. A vaginal cuff closure was generated to prevent malignant cell spillage during colpotomy. A uterine manipulator was not inserted. Bilateral fallopian tubes were obstructed with coagulation to prevent the leaking of cancer cells through the fallopian tubes into the abdominal cavity. Para-aortic lymph node dissection was performed through the extraperitoneal approach [12]. The excised lymph nodes were stored in a plastic bag and carried out through the vagina after hysterectomy. A large uterus that could not be smoothly removed from the vagina was placed in a bag and carried out through an extended umbilical incision. At the end of the procedure, the retroperitoneal and abdominal cavities were washed thoroughly with 1 L and 2 L of warm saline, respectively.

The Chi-squared () test was used to compare categorical data, and numeric data were analyzed using the Mann–Whitney U test for independent variables with a normal distribution. Progression free survival (PFS) and overall survival (OS) were analyzed by the Kaplan–Meier method and compared by the log-rank test. In groups A and B, Cox hazard model analysis was applied to detect the risk factors for recurrence. Independent variables did not include histological types (type I or type II and carcinosarcoma), because no recurrence was observed in patients with type 1. p 0.05 was considered statistically significant. All statistical analyses were performed using the IBM SPSS version.27.0 software (SPSS Inc., Chicago, IL, USA).

Fig. 1 shows the case selection flowchart. Of the 285 endometrial cancer cases, 4 without treatment, 2 treated with chemotherapy alone, and 5 with double cancers were excluded from the analysis. No cases received neoadjuvant chemotherapy. Among the remaining 274 patients, 43 underwent laparotomy and 231 underwent laparoscopic surgery. Among the latter, 4 who underwent a palliative surgery due to old age and 2 who had a stage IV disease were excluded. Finally, 225 patients were enrolled in this study and classified into three groups as follows: 176, 19, and 30 patients in groups A, group B, group C, respectively. Table 2 shows the patients’ characteristics in each group. The median number of removed lymph nodes was 35 (range, 12–75) in pelvic lymph node dissection alone and 91 (41–183) in both pelvic and para-aortic lymph node dissection. Of the FIGO stage IIIC stages, 13 patients (52.0%) had multiple lymph node metastases. The median follow-up periods (months) were 48.4 (range, 14.0–89.5), 40.6 (14.0–72.8), and 35.5 (12.0–73.8) in groups A, B, and C, respectively. Recurrence was found in 3 cases (1.7%), 4 cases (21.1%), and 7 cases (23.3%) in groups A, B, and C, respectively. 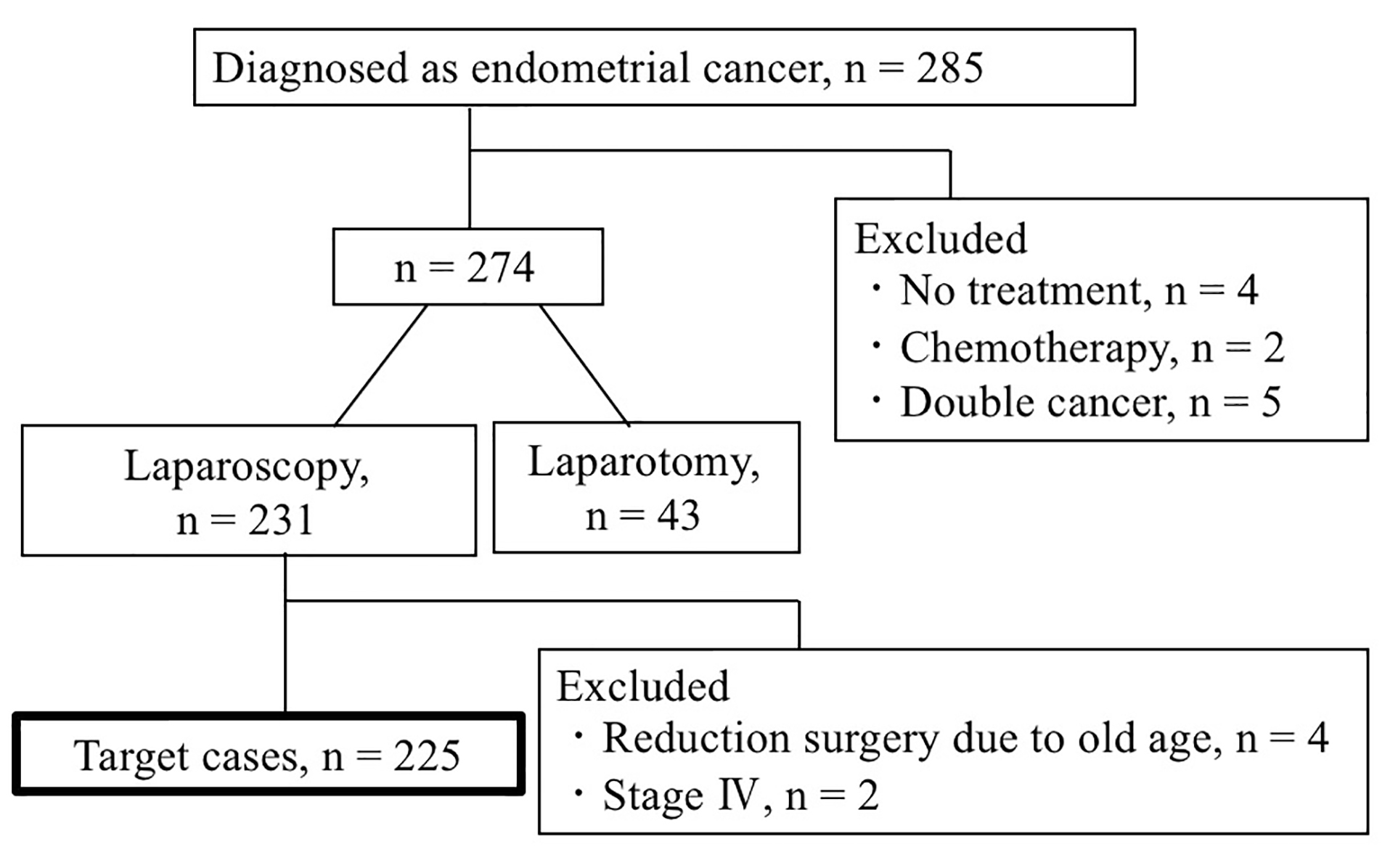 Kaplan–Meier curves for progression-free survival and overall survival in groups A, B, and C.

Here, the recurrence site was distant metastasis in all patients in group A, whereas recurrence in group B involved in dissemination of cancer cells in the pelvis in 3 of 4 patients. This result indicated that a patient with positive peritoneal cytology could tend to relapse as peritoneal dissemination. In our study, the minimally invasive surgical technique was performed by minimizing cancer cell spillage. Our surgical procedure differed from previous MIS methods for endometrial cancer in several aspects. We did not insert a manipulator to prevent artificial cell spillage during surgery, tubal obstruction was performed just after intraperitoneal observation, and the uterine os was closed with a vaginal cuff to prevent spillage during the colpotomy. Therefore, the population of patients with positive cytology in our study may have been enriched for those with true intraperitoneal disease. Also, the use of manipulators may be associated with the prognosis due to the risk of intraperitoneal tumor cell dispersal in the MIS of endometrial cancer [13]. Similar to previous reports for laparotomies, our study showed that patients with true positive ascites cytology had a poor prognosis using laparoscopic surgery. Furthermore, peritoneal dissemination recurrence is a common recurrence site in laparoscopic surgery in patients with true ascites cytology in endometrial cancer, which is a new finding of this study.

In our study, the number of harvested lymph nodes is larger than that in previous reports [14,15]. Papathemeli et al. [15] reported that the removal of 25 or more pelvic and para-aortic lymph nodes lowers the recurrence rate and improves prognosis in high-grade endometrial cancer. Kim et al. [16] reported that removal of as many pelvic lymph nodes as possible determines an accurate stage and improves prognosis, in intermediate- or high-risk endometrial cancer. In the present study, the oncological outcomes of group C may be closer to those of group B by sufficient removal of the pelvic and para-aortic lymph nodes, including those with positive lymph node metastasis. In our study, a large number of lymph nodes were removed, which may have improved the outcomes in groups A and B, as those groups would otherwise contain more patients with occult nodal metastases.

The limitations of this study are its retrospective nature, use of single-facility data from a small number of cases, and an insufficient follow-up period.

The IRB in Yokohama Municipal Citizen’s Hospital approved this study; the trial registration number was 19-05-06. Written informed consent was obtained from all patients for the publication of this study.

The authors would like to express gratitude to all who assisted in writing this manuscript.